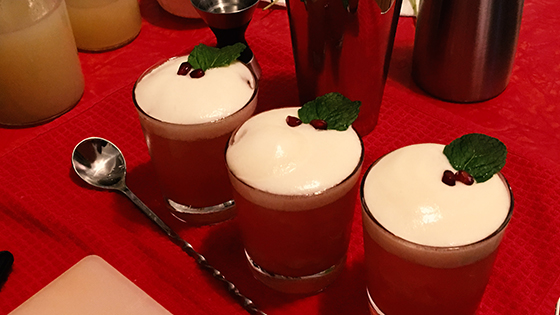 Our latest Intemperate Underground episode (#9) features a cocktail we dubbed “The Yule Mule”. It was inspired by a cocktail we had at The Big Bar in Los Angeles from their seasonal menu.

It is basically a variation on a basic Moscow Mule, with a warm undertone from the cranberry-pomegranate-cinnamon syrup. The instructions in the video are pretty complete:

But a few notes for die hard cocktail types. If it seems to you that the syrup takes a lot of cinnamon, it does! It is 3x as much as we put in our cinnamon syrup! But we let that syrup simmer for 10 minutes. Simmering did not work for us with the fruit juices. So we put in a lot of extra cinnamon, but only brought the syrup to a boil. Then immediately set it aside to cool.

Also worth noting is the foam. Fresh ginger juice is best, but bottled 100% ginger juice was very close. Presumably someone, somewhere, has a better method for juicing ginger than what we used (a microplane and a lot of swearing), but we couldn’t find it. Our attempt with the Vitamix is now on our list of experiments-we-will-never-discuss-again and ginger substitutes, like a foam with Domaine De Canton were all either too diluted or too sweet.

Ginger woes notwithstanding, if you like Moscow Mules, this is a great drink that, despite its name, you can enjoy in any season.